Clipping from a '66 Billboard issue 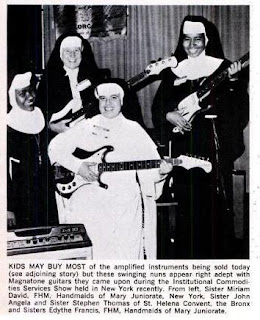 The groupies of the MONKS... Ah, probably not.
30 Kommentare:

THE ONCOMERS - Every Day Now (Gateway) 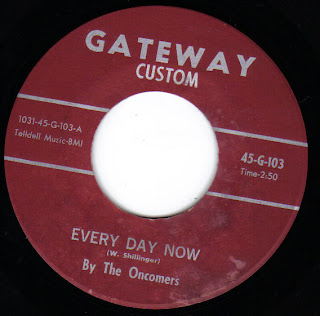 You probably heard the great moody topside "You Let Me Down" on 'Love Is A Sad Song' or 'The Unheard Of'. Now let's check out the other side of this great McKeesport, PA teen combo that waxed their sole 45 in 1964, probably, since they changed their monicker to Grant Street Exit (cf. FAF) the following year. What a shitty idea! Obviously, those guys recorded quite a batch of songs as well as a live show. Cool rave-up rhythm takes us right into the middle of the song which turns out to be a broadly smiling bastard of Brit invasion sounds and slightly raw U.S. garage beat. The icing on the cake is a cool doo-wop styled coda of the song. Corny, you say? Well, I'd say that there is pretty much the exact dash of corny-ness in here that makes this a nice garage beat rocker for your next frat party.
You can find lots of additional info here. 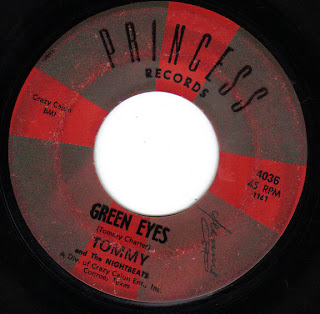 A long want of mine for quite some time. And all I got was a
2 Kommentare: 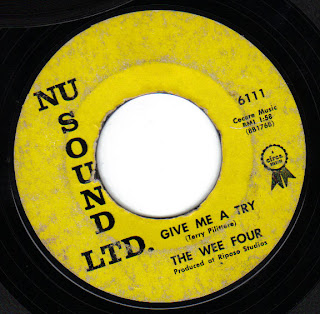 Everybody knows 'Weird', the topside of this 1966 release from NY. One of the true and eternal Garage classics in my book. This was comped on 'Teen Shutdown' and 'Pebbles'. Not so the flip, so it's gotta suck. Right? Fucking NO! Flipside is great! It's... moody. Pretty much. Even some slightly jazzy modulations like the ZOMBIES or the classic New England bands did. Check out this bad motherfucker of a song. How great is this? Unfortunaltely, my copy of this double-sided monster ain't too hot, so you'll have to wait for the big garage guys to deliver FLAC's or whatever.
Check out the mucho fine feature on Garage Hangover here.
And a cool interview on the BTBG site can be found here.

THE SHILLINGS - Just Like A Girl (Dayton Band Co.) 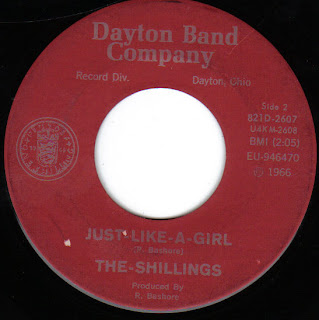 The flipside of the equally great "Yesterdays Dawn" [get an .wma here] kicks some serious ass. In a moody way, that is. They had another way great 45 on the same label in the same year, "Forgive Me My Love"/ "I Call For Her", the latter you can find on 'Strange Worlds #2', which makes an quite impressve output of four excellent sides without any fillers. This very song is pretty sparse, shifts into higher gear as we roll along and features a cool guitar break. Cool backup singing all the way.
Some additional info from Rick Dryden from the 'Ohio Sounds' blog:
Leader of the Shillings was Rick Bashore, who also produced their records. I think the lead singer was Ward Newman, both from Fairview HS 1967. Don't remember the other members. Rick Bashore wrote "Yesterday's Dawn" (along with L.Pierce, don't know him.) Rick also wrote the B side "Just-Like-A-Girl." They released this 45 in 1966 on the Dayton Band Company label.
Now, according to Wickham, this is their first platter, and both 45s are from '67. Need some confirmation here. 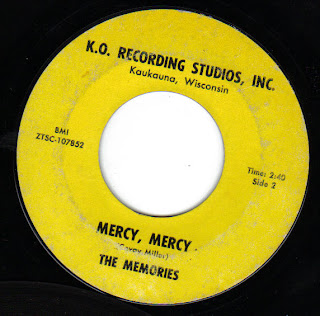 Appleton, WI's Rolling Stones are going to please you a lot. They are doing their best to emulate Mick'n Keith and the rest of the gang, but they don't ape them. They're lacking playing abilities... in a GOOD way, that is. "Girl, if you put mah down..." Listen for the cavemanish drumming, sounding even more primitive than Beach Boys drum novice Dennis Wilson. Great! Like he's glued to his toms! Can't get away from thrashing them. I gotta say this song is one of my all-time faves& I can't have enough versions of it. This ranks very high in my personal "Mercy, Mercy" top 10. From 1966. K.O. Recording Studios outta Kaukauna. Flip ("That's How Strong My Love Is") is equally great& will be found on a future STRANGE WORLDS comp. 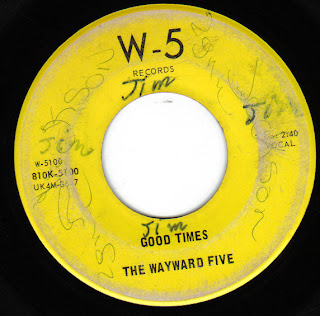 A Michigan combo that waxed two 45rpm's in 1966 and 1967, the first being on the fab Lee label (Satisfactions, Marauders, Cyclones,... "Can't Get Enough Of Your Lovin'" comped on Wyld Sydes#2), the second one seems to be a self released thing. They got a hip cover of Tail Feather on the topside but the flip is cooler. They are believed to be from the Midland/ Mt. Pleasant area (c.f. 'Music Makers From Mid-Michigan'). Anyhow, check out this cool blaster!

Not Falling But Soaring! 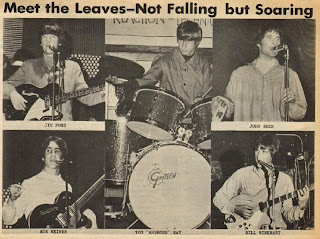 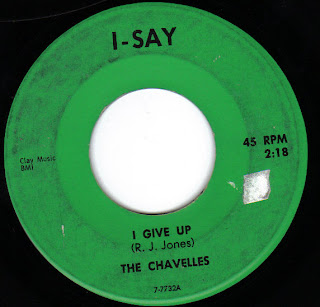 Scarce rocker outta Nowheresville, USA (possibly Colorado, though the guy i bought this from says Carolina). Tight production suggests a later release date, possibly 1967? Pretty sure that it was released at the very end of the garage explosion. You can already feel a certain "funky" vibe coming through, but the disc is still on the good side.

Fabulous Garage Beat With A Healthy Dash Of "Invasion Sound" 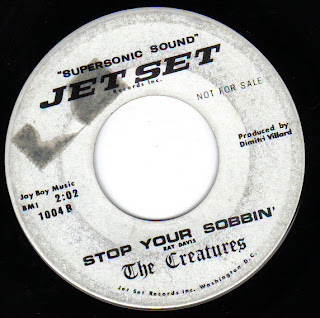 Great piece that strangely has never been comped. Oxon Hill, Maryland combo that delivers the goods. Flip has been on FLAYKES and HIGHS but check out the topside, a slightly pissed-off rant to a hang-up girl. Great jangly guitar works and a quite punchy production make this cool disc something well worth having. A 1965 release. Also dig the fab label design, complete with an ace font for the band monicker.

A Yardbird Copy? Listen, You Fucked-Out Piece Of Cheese... 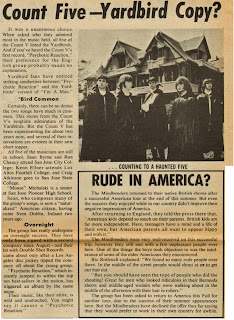 Some good reading from a 1966 Billboard issue on one of the top garage bands ever. The cheese-thing is by henry miller, so don't flame me.
Keine Kommentare: 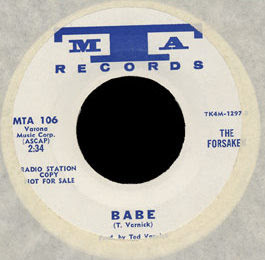 Shhhh... This a preview on STRANGE WORLDS#5 (again, a moody one), so don't tell. Glorious, pretty psych-y lament. Gorgeous harmonies meet ace songwriting and, talk about a gloomy mood! This has not been reissued before, and i have no idea why. Since MTA is obviously a NY label distributing mainly CA bands, those guys are either from NY or from CA. (More on MTA on chris' fab Garage Hangover website!) Listen for those cool weird guitar interplays and the guitar player switching back into surfy garage-band-mode during the refrain and bridge. Probably early/mid 1966.

(note: pic taken from chris' fab website, since my scanner screwed up. will be replaced soon) 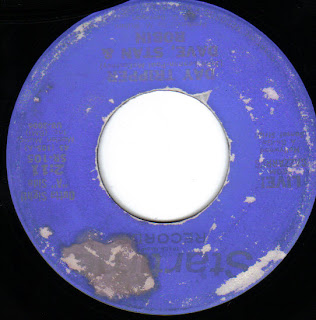 Fuzzed Instro Beatles Bash Chug-A-Lug
Beatles, eh? Yessir, and a cool slab of it, you can be sure! You probably have heard the flip, "Get Off My Cloud" on STRANGE WORLDS#3 (this is a plug) and are now craving for the flip. Here it is, done in exactly the same vein: piano (yes, for chrissakes, get over it) dominated rock'n roll mover with the chorus shouted out by a bunch of partying kids. No idea where this record came from or it there are similar releases on the label. Partytime with Startime. Dig the mouldy label! The Billboard issue from Feb 5th 1966 predicts this disc to be a top 100 thing. 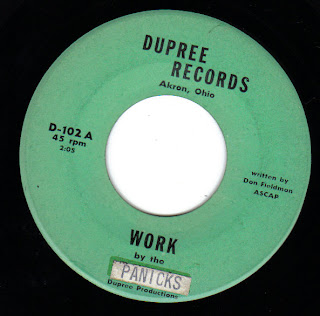 Fine, Sonics-inflected boom from Akron, OH, 1966. They had a later 45 on Dupree ("You're My Baby"). This yet uncomped cut is pretty basic, but shifts into high gear as we go along. Raunchy riffing and screaming make up for the tame production. And, as pointed out before, this reminds me a bit of Northwest combos. Listen for that whammy-bar guitar stop fills, like from some kind of raunch/ strip-instro. Great stuff. Obviously those guys had a different name before, because the "Panicks" monicker is glued over the original one.


►►►Buckeye Beat has a cool feature on the group. Read it HERE. 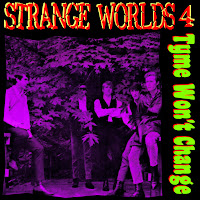 THE DEMATRONS - The Boy Who's Sixteen (Southern Sound) 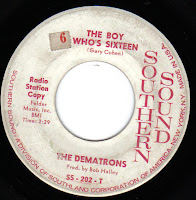 This might actually be my very first Garage type of record! Bought it quite a long while ago for almost nothing& loved it ever since, even it's very "pop". Obviously from 1963. The record has a nice little Doo-Wop flavour and ace harmonies, but enough raw teenage-vibe to classify if a "Garage" disc. From the New England area. The song will stick in your ears, promised! The flipside is a pretty dull and schlocky turd, so dig the topside twice. Or thrice!
Here's a pic of the group.

THE HOLIDAYS - I Want To Do It (Dixie) 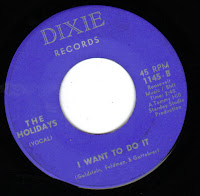 You will probably know that song done by other teen bands. Fab '64 rendition by a Pittsburgh bunch of kids who step on the gas pretty heavily. The fine flipside, "I Got News For You", you can hear on STRANGE WORLDS #2. Those guys did at least one other 45, also on Dixie, but it's a (kick ass) instro thang. 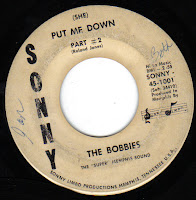 The idea may sound boring: You have no ideas for you 45 flipside, but you gotta record right NOW, so just belch out some kind of "part two" of your topside. Could be a pretty dull thing, but not on this fine 1966 piece of wax. Topside kicks ass (check out STRANGE WORLDS#3), but the flip is even weirder: A cacophony of teenage wacko-ness, live onto tape. I'd like to know what the guys in the recording studio thought about this. From Florence, AL. Go go go!
Some additional info that was posted as a comment:
Glenn Hall - Bass
Donald "Duck" Heupel - Guitar
Richard Haun or Hann - Keyboard
Randy Whales - Drummers
Bobby Heathcoat - Vocals/howling

This was recorded at Sun Recording studio in Memphis, TN in 1966 by Judd Phillips (Sam Phillips brother). (She) Put Me Down was a Jerry Lee Lewis song that was sold to Sun records.
Jerry Wexler wanted to buy this song performed by “The Bobbies” but problems with their producer caused this to never happen.
The original side b was suppose to be an amped up version of "I Call Your Name" by The Beatles but on the 2 hour drive to the studio, they heard The Mamas & the Papas cover this on the radio. They came up with side 2 on the fly.

THE VADNALS - Henry The VIII, I Am (MLAY) 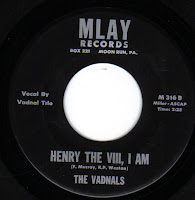 Ok, 50 posts are successfully done, so let's celebrate! Here's a real mean disc... Ever dreamed of hearing a rendition of "everybody's fave" tune "Henry The VIII" with accordion? No? Shame on you... here it is anyway! Honestly: It's awfully BAD, but funny to dig, just try out.

THE TORQUES - Don't Give Your Heart Away (Lemco) 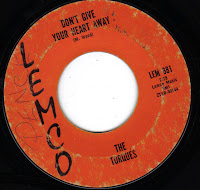 Great Kentucky-area record from 1967. The pressing plant obviously screwed up here, because the record has to pitched quite a bit. What we get is a beautifully delivered moody garage ballad that leaves nothing to be deserved and once again proves the high songwriting qualities that were aparent back then among "the kids". More info welcome! 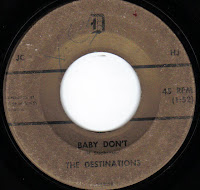 This won't be easy to swallow for the "fuzz-punk"-crowd. The DESTINATIONS deliver a super-sparse moody teen garage thing that's as whimsy as it gets... In a good way, that is. The production is clearly non-existant, the playing sloppy, the singer probably scared of the whole thing himself... A real gem! The label perfectly fits the tunes on it: Spartanic.

DIMENSIONS A - The Light (Global Records) 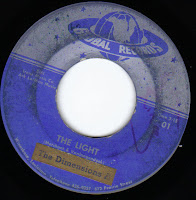 Also a grower. Fine, rugged harmonies applied to bursting teenage songwriter craft. The results are impressive, though it's easy to hear that those guys never had a chance on the "Hot 100" anyway. Do them and yourself a favour and dig the topside of their lone 45 now, like 45 years late. 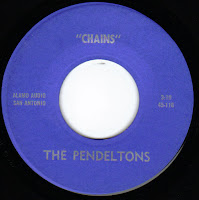 On the ultra-collectible Alamo Audio from Texas comes this San Antonio group with their lone 45.

FRIENDS OF MIND - Moving Through Your Mind (Insounds) 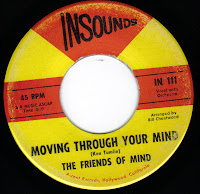 Very folk-y and quite psychish garage lament from Odessa, TX, circa 1966. Dig the cool label design. The flip is equally good and in a similar vein, too.

Lee
All tunes can be downloaded here: http://headdiprecords.com/blog/